Over the last few weeks we have had  a couple of free cakes for kids orders to fulfil and a couple of birthdays which I wanted to mark with a cake but wanted to keep simple to keep the cost and time involved to a minimum as we have been busy bees here at Hours of Fun.    Rather than have to say no to cake when I am busy I like to come up with simple yet effective and delicious solutions that can be implemented instead.

Free cakes for kids latest bakes have been cupcakes – which were vanilla sponge with vanilla frosting and toffee sponge with banana frosting.  I also did a cake for a special music lover which was an 8 round decorated in black and white with musical notes.  Following making this cake I have added a musical notes cutter or mould onto my wish list!  The cake was vanilla sponge with jam and vanilla frosting for the filling.  I have also made a giant cupcake for a special girl’s birthday.

For a friend of mine I made a 5 layer lemon sponge with lemon curd and vanilla frosting filling.  It was decorated with a sprinkle of icing sugar and only just fit inside the cake box it was so tall!    This was made using a 6” round tin.

Another cake was made using a 6” heart shaped tin.  Again this was a lemon cake with lemon curd and vanilla frosting filling.  Covered in a layer of ready roll icing and decorated as a parcel using pink ready roll icing for the ribbon and bow.  I placed the cake slightly off centre on the board to allow room for a message to be added saying Happy Birthday.  This shows how a small cake on a small board can look really effective and keep the costs down.

For my nephews birthday we wanted to give him a cake but keep the idea simple as he is planning on having a birthday party in a few weeks which I will make a cake for him to have then too.  As I have been doing quite a bit of edible printing recently I decided to get a Guardian’s of the Galaxy print out done which could be placed on top of the cake.  The cake was then covered in stars to finish it off.  The picture was printed onto rice paper this time and is stuck to the cake using a little bit of frosting.  The cake was a chocolate sponge with vanilla flavoured filling.

Other bakes have been carrot cookies which went a little wrong!  Orange buscuits which were lovely. 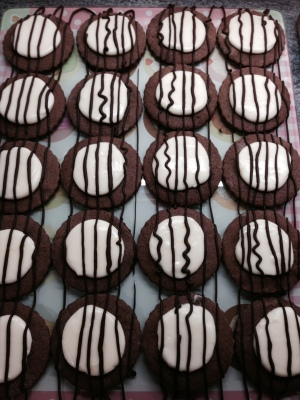 Chocolate eclairs and a chocolate tart made by Kev which were both delicious. 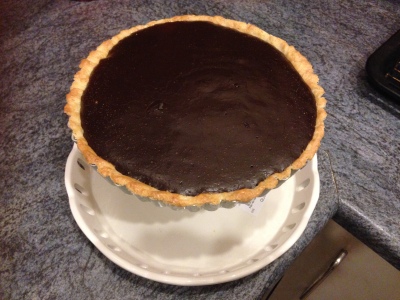