I was asked to make 2 cakes for a special person turning 60.  They were having a weekend away with family and a party – of which both occasions needed a cake!

The theme we went for was the birthday boy’s scooter, his pride and joy he had bought a couple of years ago.

Cake number 1 was a round 8″ chocolate sponge cake covered in white icing.   It had a scarf draped around it in the Everton colours and a model of the scooter and the birthday boy on top.  The scooter was made from ready roll icing mixed with Tylo powder to strengthen it and it had a few lolly pop sticks in it to help it stay stood up.

I have since heard from the birthday boy that he placed the model of himself on top of the scooter and has kept them in a box with all the cake toppers taken from his son’s birthday cakes – they must have quite a random selection in this box including Mike the Knight, Darth Vader and George on a scooter!! 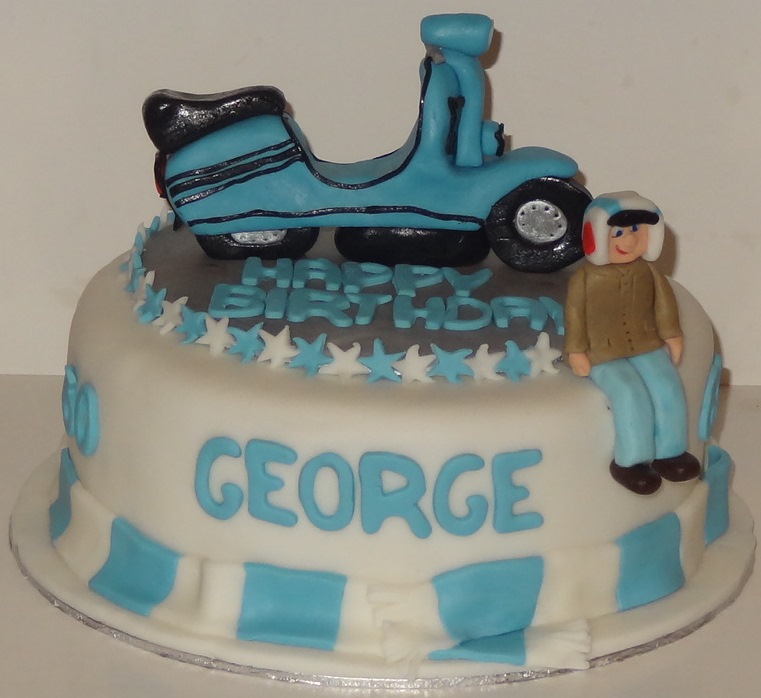 The second cake was for the party and more cake was needed so we went for 2 tiers of chocolate sponge cake, one 10″ square and one 8″ square.

The bottom tier was decorated as a Union Jack flag – this was the only section of the cake that was allowed to have red on it, as the birthday boy is a fanatic Everton fan so it’s blue all the way for him!

The top tier was decorated to look like a record player and we had one of his favourite records playing – Play that funky music.  The arm for the needle was made from a GBS Chocolate mint stick, these are similar to Matchmakers but are smooth on the outside and 1 stick was the perfect size for the record player.

Happy Birthday George – hope you have finally recovered from all the celebrations!!